3D "Me to You" Teddy Bear Cake

Yesterday at the Woolie's self serve checkout, I was alerted to staff members with flashing red lights and was unable to pay without assistance. After 5 minutes of waiting, I found out it was because I was buying plastic knives for a catering job I had. They presumably had to check how unhinged I looked I suppose...just in case I was about to go on a plastic cutlery stabbing spree through Oxley. Mustn't look as crazy as I am, because they let me buy them after all.
The following day I was out with my husband couch shopping, and on finding a glorious leather looking Chesterfield, I inquired to the assistant concerning its material. "It's sympathetic leather" She replied. I looked at her incredulously. Sympathetic?
Not synthetic, sympathetic. Turns out there's such a thing. Oh my. Good for the cow though, some one took heart and it didn't get the chop to make that couch.
It appears I have been living under a rock. During this time of hermit like behaviour, the world has stopped selling plastic knives freely, and has turned plastic into faux leather with emotions. Who would have known!
And just what have I been doing with my time? Not blogging, obviously.
In fact, I hardly have been cooking anything imaginative or exciting at all. The year has gone in a heartbeat, and my baby girl has just turned one. Was that not the fastest year in the history of mankind?
Anyway, without further ado, here is my daughter's first birthday cake, modelled on the famous "Me to You" teddy bear. (my husband gave me one of these when we were dating, so it holds a very special place in my heart.)
I had never made a 3d cake before but took the plunge, and it was simpler than I expected...except for the icing. I thought that would be the easy bit, then I discovered, in that moment when I was ready to ice, that I did not possess the required piping nozzle...the grass nozzle. I turned the house upside down in a cake-induced frenzy. My husband and my kids hate when I make special cakes, it sort of makes a mad woman out of me and the house goes to seed. It takes a week to recover from the havoc wreaked on the kitchen. (At this moment visualise a scene from the epicentre of world war three).
So the cat ate my homework, or more to the point (no pun intended) my piping nozzle. So I went shopping, and found that piping sets from cheap shops and regular supermarkets come with everything BUT the grass nozzle.
I came home with a garlic crusher, determined to pipe that darned fur!
Necessity is the mother of invention. It was not pretty. The icing bag burst every 3 minutes. I couldn't pipe in the crevices and joints. It was the stuff nightmares are made of. But standing back, once eyes and patches and the nose was on, I totally loved the outcome. It was shabby but cute, and perfect for a 1st birthday party. As long as no one looked too closely! So I highly recommend, not going the garlic crusher route. Buy a good, metal grass nozzle, you will have greater control over where that fur is going and how shaggy your teddy becomes.
The cake it self was a Mississippi Mud cake-This is a great recipe for working with with cakes like this. It's special enough to be used as a wedding cake, and keeps moist and delicious for at least a week. Best of all, other than the flavour, it is very easy to carve and shape after a rest in the refrigerator. I used a double mix of this recipe and had a bit of cake left over. The teddy was made up of two 5"x3" cakes for the body and a 4"x2" cake  (approximately) for the head. I also made a few more cakes with that double batter, most of which got used in the modeling of the arms, ears, nose and the legs. (The cake was crushed into crumbs, and then mixed with a generous amount of butter cream icing to make a moldable cake mixture.) The head and the nose were secured with the help of some wooden skewers. The nose and smooth accessories on this 3D teddy cake were made from rolled fondant.
I hope these pictures help you on your cake journey! I apologise for not taking pictures when I was in the thick of piping that icing, everything was so sticky and frustrating, I didn't even think of it. Shoot me any questions you may have, I am always more than happy to help where I can! Good luck! 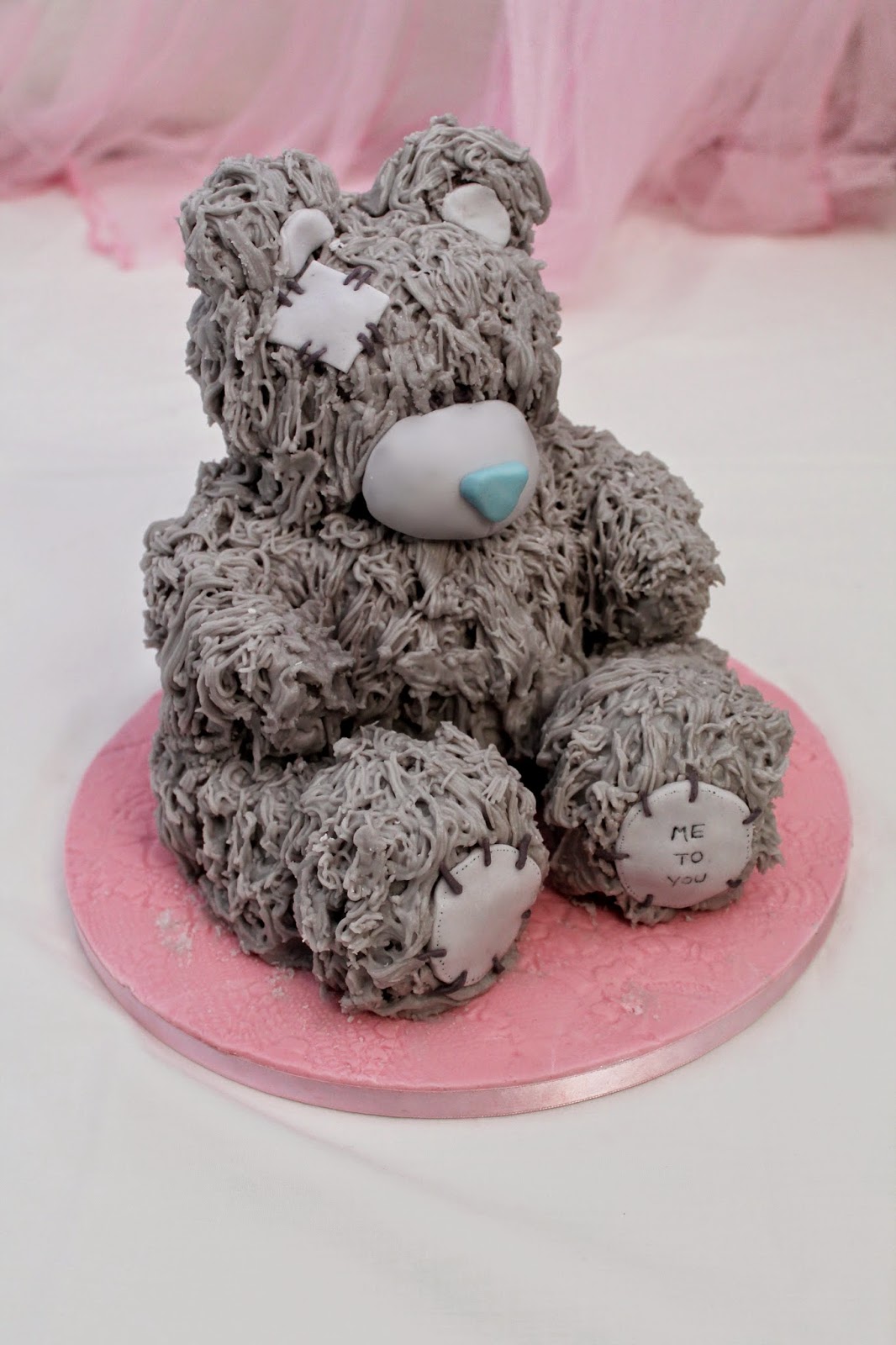 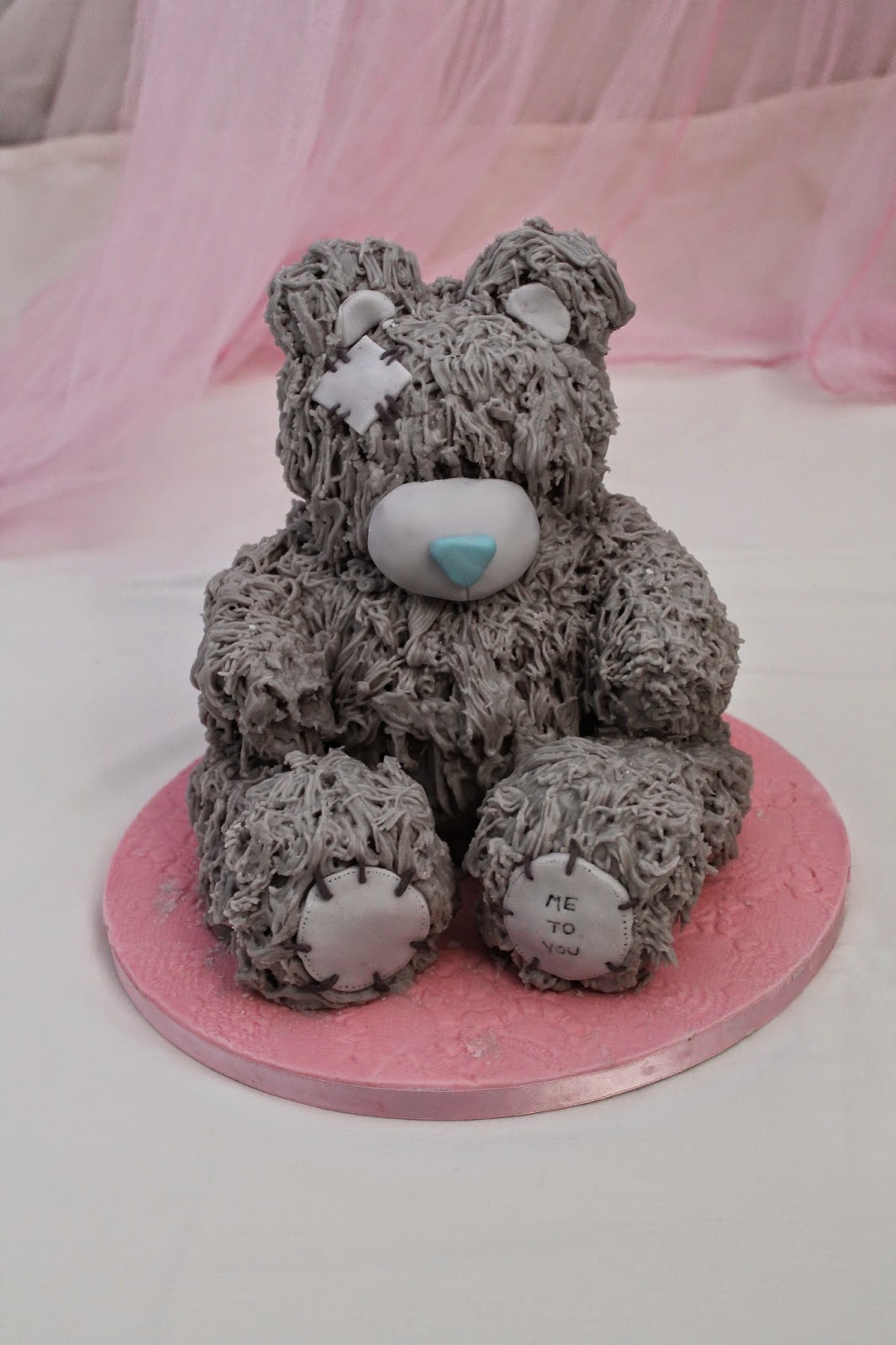 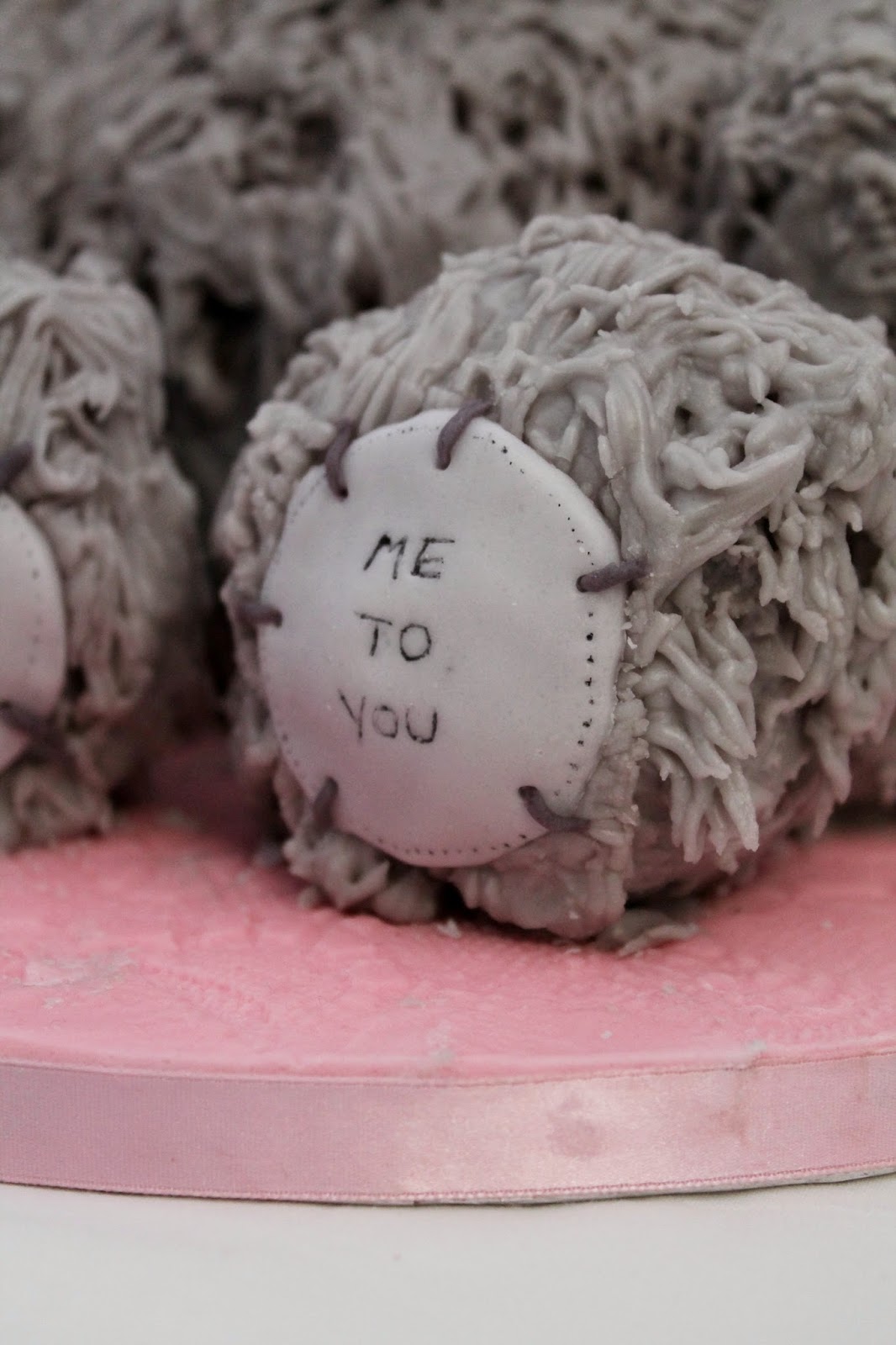 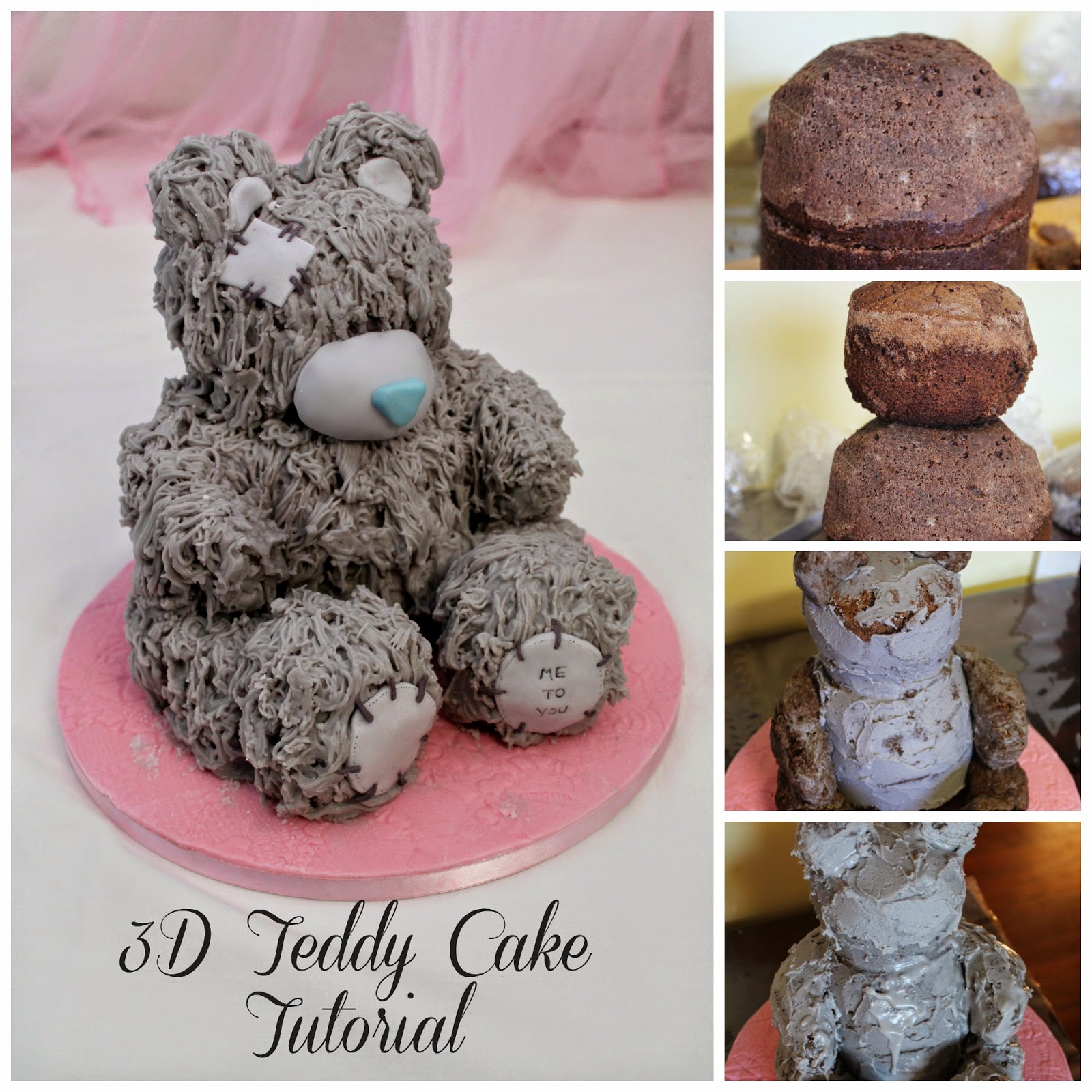 Mississippi Mud Cake Recipe can be found here. I doubled this recipe for this cake.

There are five cakes involved here (only a double of the recipe) The two taller ones are for the bady, and the top small one was the head. The other two (sorry one cut out of picture a bit) were for limb molding.

I cut off the top off one of the 5x3 cakes and stacked it with the other 5x3. Using the electric knife I carved the top layer to make it rounded. These cakes had been in the refrigerator, and that makes it much easier to carve.

Using wooden skewers, the head cake was placed on top of the two 5x3 cakes. I trimmed a little off the head cake because it had a few rough edges.

The cake board was prepared with a covering of rolled fondant, and the uniced cake placed upon it. The remaining cake and the cut-offs were combined with butter cream icing to make a moist mixture which is able to be molded into the arms, the legs and feet, as well as the ears and nose.

The arms and legs and feet as well as the ears have been attached. Only the ears needed skewers, the rest just sat there and looked stable, but feel free to use more skewers. I then did a generous crumb coat, before piping the fur like butter cream icing all over the bear. (use the grass piping nozzle) The snout was covered in fondant and skewered into place after icing, as well as the patches, eyes and insides of the ears. 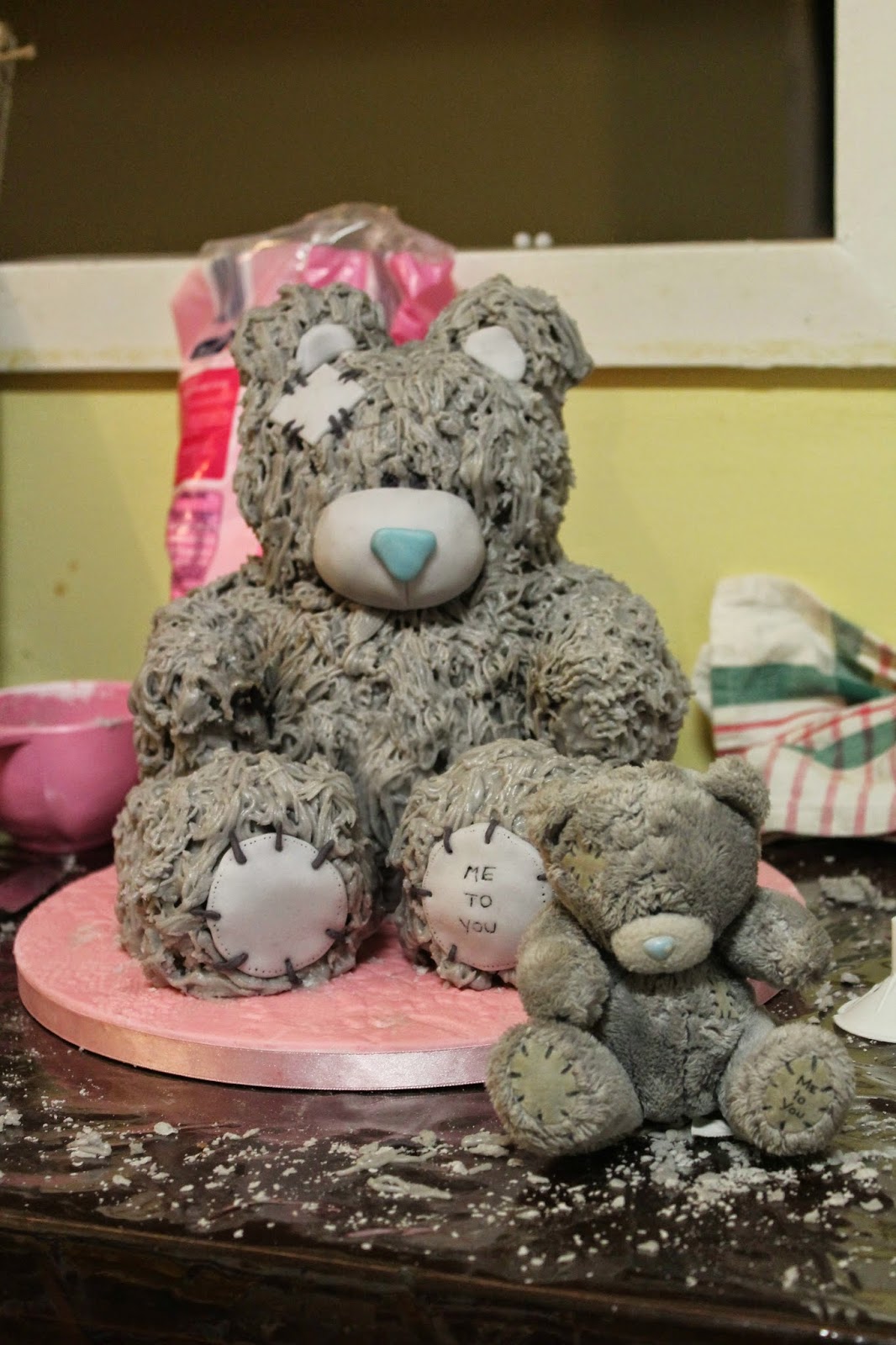 The unglamourous innards of my kitchen after the job was done! Told you it was like a bomb had hit the kitchen. 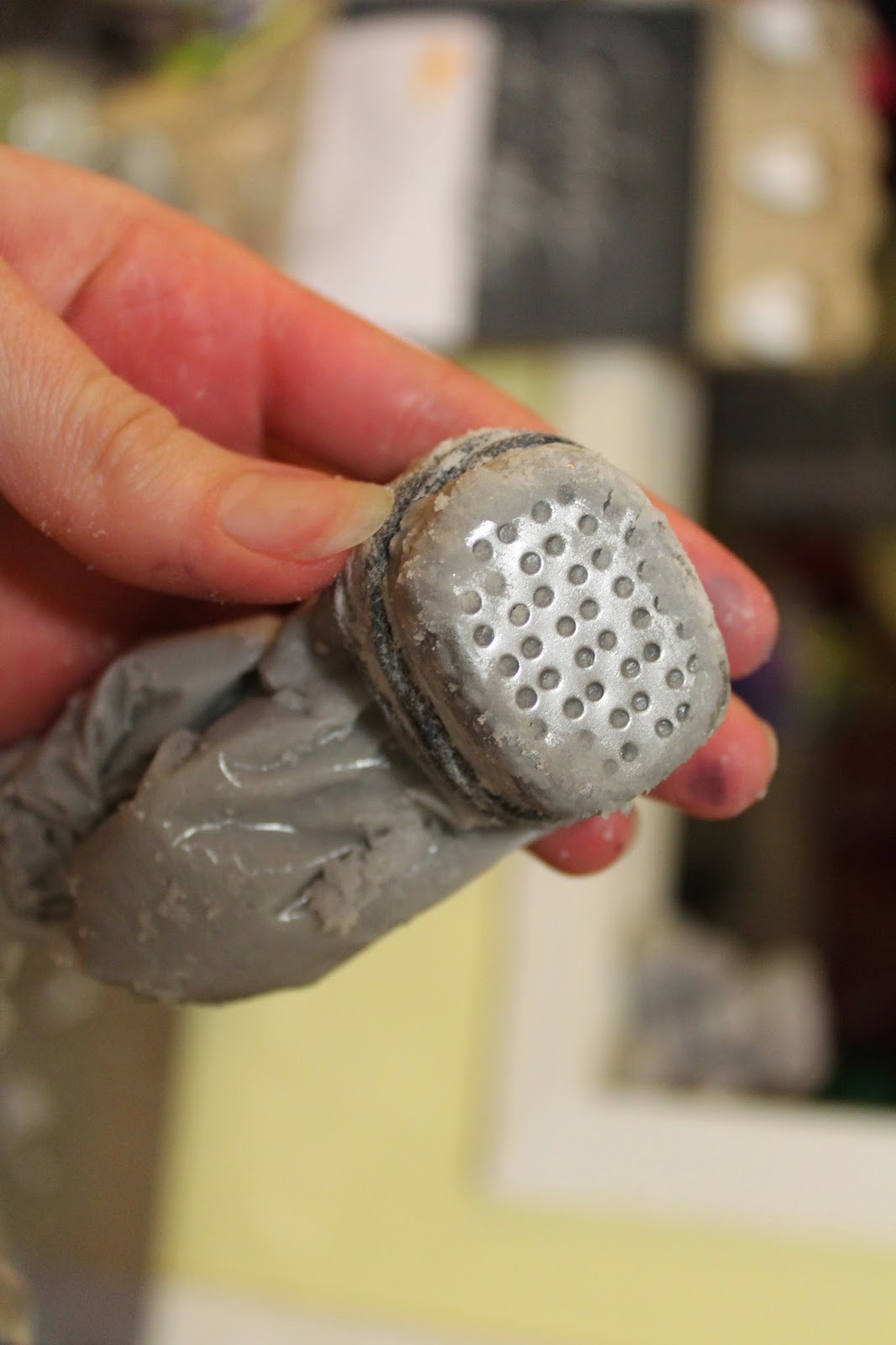 The infamous garlic crusher-turned-grass-nozzle. Yes that's a hair tie. Never again. Do yourself a favour and buy a real one!

A few pictures of the birthday and the cake cutting. Yep, that's me and my loves! 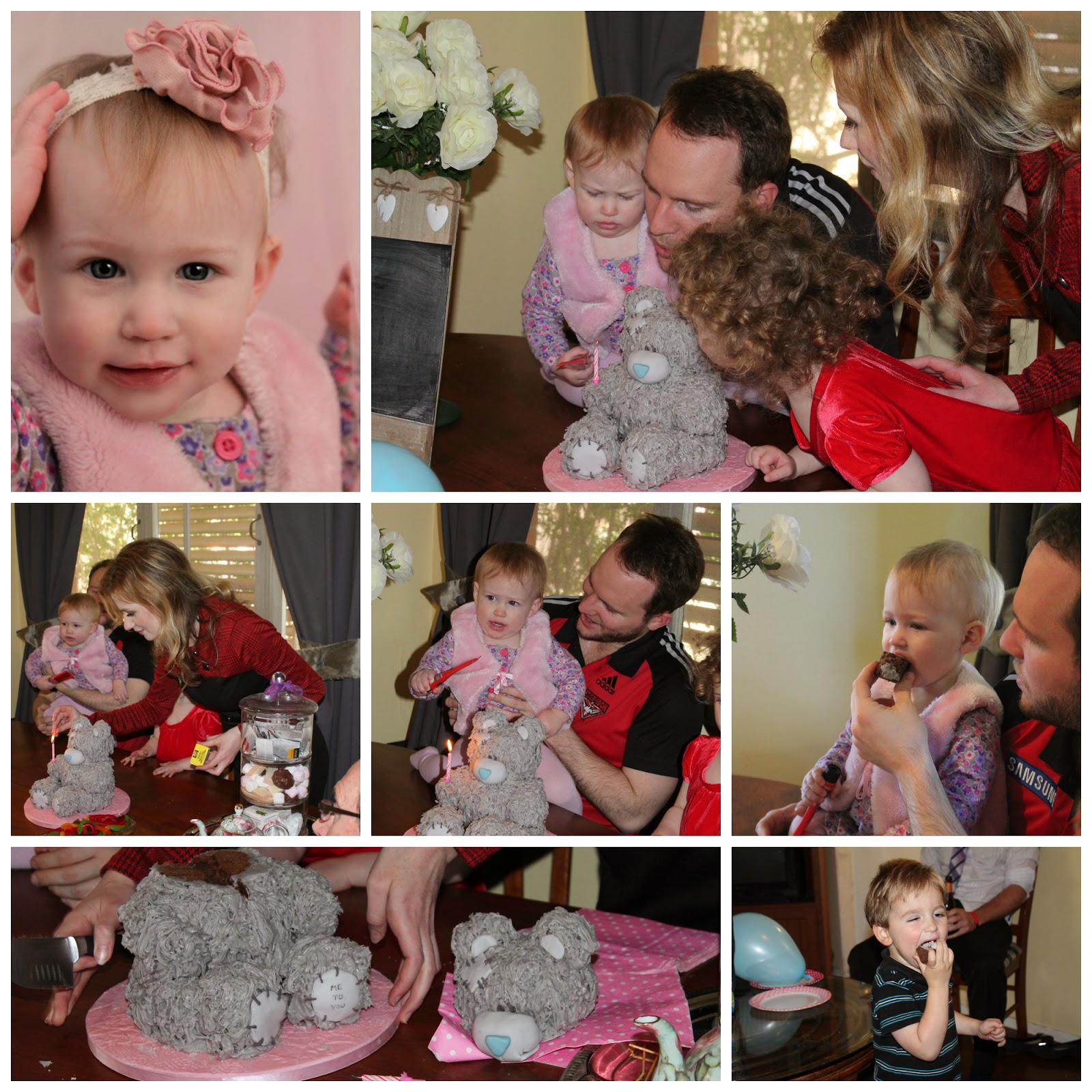