I'm pretty excited to add yet another savory to the blog this month. Is that a round of applause? I know, I know,  I am basically a "sweets maker", and I often don't even try my hand at it because my husband rocks in the kitchen with savories. But this month's Secret Recipe Club assignment popped up and directed me to New York City Eats and I fell in love. I feel I should apologise to Lacy from New York City Eats, because I used the idea of her recipe but just sort of winged it when I got into the kitchen. You know, when you forget to buy the specific ingredients, and have to substitute when you get to it? Well, I guess that's the true beauty of cooking, adapting a recipe due to pantry limitations, and arriving at something similar but with a twist. I have been wanting to try out a few different recipes that would serve as hors d'oeuvres for a party my husband and I will be holding in the coming months. So I made these babies in a few different sizes--some man-sized ones for my husband to taste test, and some smaller ones that would be a good size for party finger-food. Man, these morsels are delicious! And very easy to whip up. Lacy from New York City Eats used butterflied chicken tenderloins for this recipe, but I only had chicken breast. The local butcher sells the biggest chicken breasts around, two of them weigh over a kg! So as you can imagine they are rather fat, chunky things, so I had fun belting it flat with a rolling pin...one way to get out some frustration without hurting anyone! I mean, who doesn't have some sort of frustration in the kitchen?
Speaking of frustration in the kitchen, Lacy I hold you responsible for an amusing incident that happened today! While photographing these delicious morsels, my daughter Vienna was close by on the floor. Yes, I have a lousy photographing system by the back door, its the only place in the house that gets good natural light. Well, here I was busily clicking away and I realised there was a funny panting sound coming from my baby. Before I knew it, there she was, hands reached out to those bacon wrapped, chive and sour creamed, balls of chicken-y goodness. She had crawled her way over! Mind you, there was a trail of drool along the way (saves me getting out the mop I suppose!) Did I mention she's not even 5 months? Now if that's not a good reference for these Chicken Chive and bacon rolls, I don't know what is! 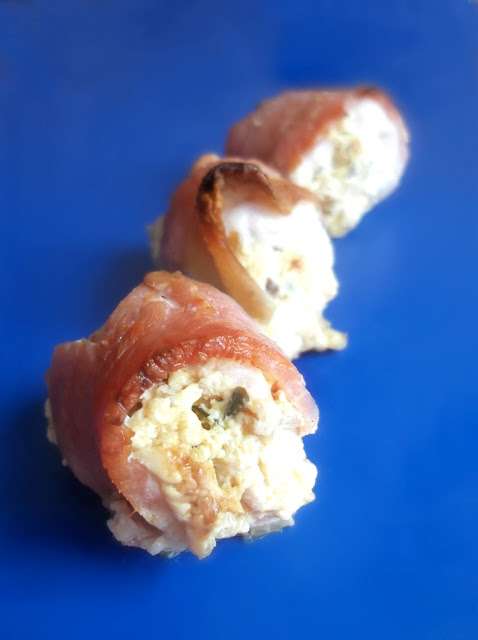 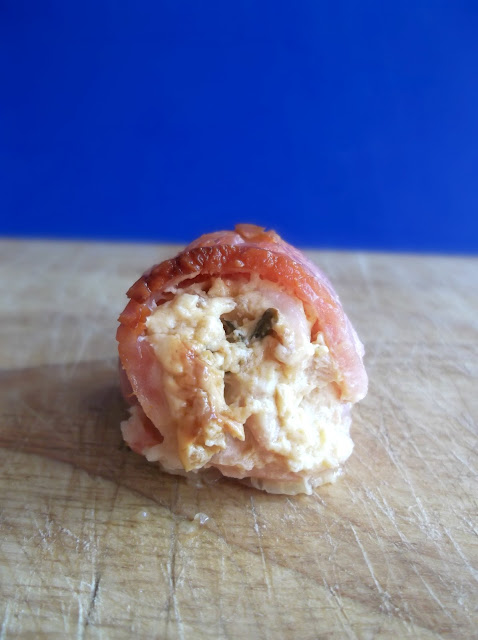 Cut the chicken breast in half horizontally to achieve two pieces of thinned chicken breast.  Lay each piece on a board and cover generously with plastic wrap. Using a rolling pin, beat the chicken until thinned further, to a desired thickness. Cut into strips in any desired size.
Combine the sour cream, chives, garlic and onion powder together in a small bowl. Stir until well combined. Lather one side of each chicken strip with this sour cream mixture. Roll each from one end to the other to form a roll shape. Cut a piece of bacon the size to fit around each piece of chicken.
Lay on a lined tray and cook in the oven at 180C for 15-20 minutes, or until the chicken is cooked through. To crisp up the chicken, place under the drill on high for a few minutes. Serve hot for optimum enjoyment!

NOTES: you can use cream cheese instead of sour cream and onion powder instead of french onion soup powder, if preferred. 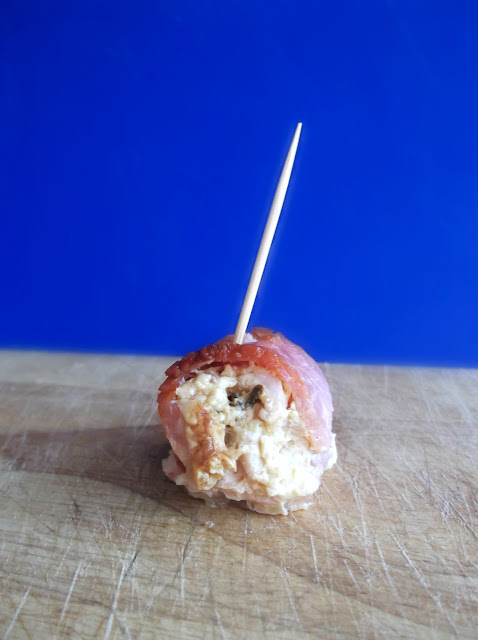