There are some flavour combinations I could never get over. Coconut and lemon, chocolate and orange, sugar and cinnamon, or that never tiring, ever fresh strawberries and cream duo. Alright, I believe the strawberry theme has been overdone on here of late, and this one soon is to be also. Why can’t I stop using custard? Just about everything goes with custard! And now that I have proudly perfected the little rascal, I am in fits of indulgence eating it all the time, and dreaming up things to put it in or on or amongst.
Now the other day and lovely lady asked me what the devil to do with a bottle of caramel essence. It reminded me of last week when my husband and I came across chocolate essence in the supermarket and we both laughed. What on earth would you want chocolate essence for?
So since being asked  for ideas on how to use caramel essence, I went out and purchased some and began thinking, thinking. Google was no help what so ever. So my mind had to do some work for once. I deduced that the answer to these mystifying essences was super simple. Sometimes, you want the flavour but the textures won’t mesh. For example, if you had a quantity of caramel and wanted to make a caramel mousse for dessert, the textures may clash and you might end up with a disaster on your hands. And sometimes you want the flavour without the bother of making a pot of caramel goo, just for caramel icing for those gorgeous little cupcakes. Let’s face it, there’s nothing like the real thing, but an essence is a time saver, a shortcut, and a tasty one at that. And its safe.
So, add that caramel essence to anything you wish. You can substitute it for vanilla essence in any recipe for a different twist, in slice bases, in cakes, in icing in desserts. I'm looking forward to adding it to fudges, mousses, jellies and biscuits. Any one else got some fabulous caramel essence ideas? 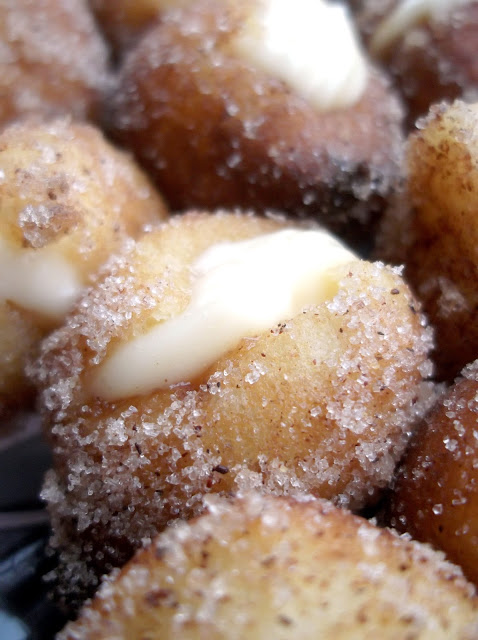 Put sugar and cinnamon in a baking tray and combine. Put milk and butter in a medium pan and cook, stirring over a low heat until the butter has melted (do not boil). Add flour and stir until mixture forms a ball. Transfer to a large bowl. Add eggs one at a time, mixing well after each addition until completely combined. Put mixture into a large piping bag fitted with a star nozzle. Heat the oil over a high heat. Pipe blops of mixture into the oil and cook for 2-3 minutes or until the balls float to the top and are golden. Immediately transfer with a slotted spoon to the sugar and roll until well covered.


CARAMEL CUSTARD FILLING:
2 cups milk
4 large egg yolks
6 tbsp sugar
3 tbsp corn flour
40g butter
1 tsp caramel essence
To make the custard, bring milk to the boil. At the same time, in a separate saucepan, combine yolks, corn flour and sugar together and whisk over a low heat until the milk boils. Add a splash of boiled milk to the yolk mixture and begin to whisk vigorously. Gradually add the rest of the milk, continuing to whisk constantly, until thick and smooth. Remove from heat and immediately scrape the custard into a bowl and place in a basin containing a few inches of cold water. Add the butter in 3-4 installments. Add caramel essence to flavour. Cool.
Peirce each cinnamon ball with a knife. You will notice one side of each ball has an air pocket. This is the side to pierce. Fill a piping bag with the custard and pipe into each hole. Serve. 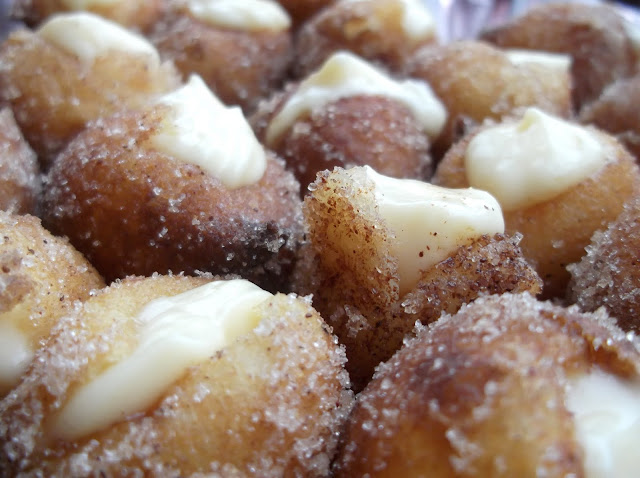