You know me, I like quick and effective recipes...the ones that just look and taste fabulous without any effort. But I like art, and I think especially with dessert, its worth putting in the extra mile to have it looking fancy shmancy. I thrive on that part of cooking. Often its the small details that make all the difference, and turn it from looking everyday to a specialty. Gourmet. Who would eat regular looking stuff over gourmet? Not me. Food snob here.
But I must add, very often something that looks like a bowl of mush often tastes amazing and so on. But...I'm a visual person, I thrive on looks. How very fickle of me.
Anyway, back to my initial point. I had a dessert to make for 18 people for a dinner party. I found a great sounding recipe for Dutch Apple Pie and it looked too irresistable not to make. Okay, part of the attraction was that it was labled Dutch, I admit. What the heck is a Dutch apple pie? Here we go on another tangent.
Dutch apple pie, unlike others such as the American, English and French versions, is often flavoured with lemon juice and lots of cinnamon, and sultanas (which I omitted because I loath the things) They are often decorated with lattice pastry on top or crumble topping and occasionally icing.
What I've been meaning to say all along is...you get to the end of the recipe and you wonder if it was worth while. The time, the effort, the waiting, in exchange for the appearance, taste, the delight and satisfaction. Some things you know will take forever to create and you know in the end it will be worth it. Others--you look at, taste and wonder.
Anyway, this apple pie took ages to make. Probably because I made two, and also because I made the recipe back to front, starting with the apples, filling, and then the pastry--which was ridiculous of me. It was the pastry that took its time. Apparently it was worth it. Those pies went down a treat after dinner and most people went back for seconds. It got a thumbs up all around. And even though the pastry frustrates me, I'm posting the recipe because it was worth it. I wouldn't post it if it was like any other apple pie recipe. This one was different. The apples maintained some firmness, some crunch. The pastry was good! The topping was delicious. The filling...yummy. All the textures and flavours married so well. So, it's a worthwhile recipe! You may use store bought pastry if you're low on time, I assure you it will still be worth it. This recipe makes one large pie. I added and subtracted several ingredients to personalise it, I hope you enjoy it!

In a large bowl, mix together the flour, sugar and salt. Scatter the butter over the dry ingredients and using  your fingers, work the butter into the flour mixture until it resembles breadcrumbs. Then sprinkle the water over the mixture and use a fork to incorporate until it is evenly moistened and the dough will hold together when pinched between your fingers.
Flatten the dough into a disk, wrap in plastic and refrigerate for at least 1 hour, or up to 2 days. After refrigeration, roll it out on a floured surface to a 12 inch round. Transfer the round to a pie dish and press to the base and into the edges. Trim the edges to extend 1/2 an inch over the lip of the dish. Place the dish into the freezer for 30 minutes until very firm and cold. Place the oven rack on the lower middle position and heat the oven to 190C.
Cut a piece of foil big enough to cover the pastry, and sit it inside the pie dish over the pastry. Using pastry weights or rice, cover the surface of the foil. Bake with the weights and foil for 25 minutes or until light golden brown and dry to touch. Remove the foil and weights and return to the oven for a further 10 minutes. Remove the pie dish from the oven and set aside to cool. Increase the oven temperature to 220C.

Peel the apples and core them. Cut each apple into four and each quarter into four or five pieces each. Combine the listed cinnamon, lemon juice, sugar and salt in a bowl with the apples. Heat the butter in a large saucepan until bubbling. Add the apples and cook at medium high for 10-15 minutes until they begin to soften (yet still hold some shape). Using a colander over a bowl, transfer the apples and shake to strain the excess juices into the bowl.

Transfer the juices into the empty saucepan and add cream. Cook this mixture, stirring occasionally until it thickens and a wooden spoon leaves a trail at the bottom of the saucepan. Transfer the apples into the pie shell, top with the hot syrup. Combine the flours and sugars reserved for the crumble mixture in a bowl. Drizzle with melted butter and toss with a  fork until well combined and the mixture forms chunks. Sprinkle this crumble over the apple mixture. Return to the oven until the crumble is nicely browned.
Remove from the oven and cool.
Combine icing sugar and water together to make a paste. Place in a piping bag and drizzle over the crumble on top of the pie. Serve warm with ice cream or cream. 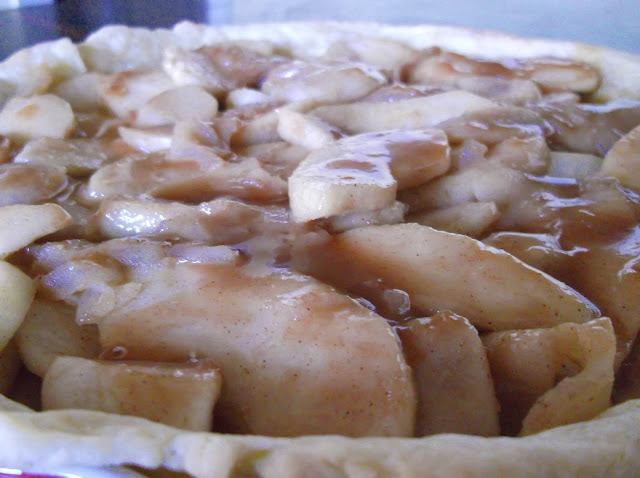