I recently did a short poll on Lick The Spoon's facebook fan page about cheesecake. I don't know anyone who doesn't like cheesecake, but the question is, baked or refrigerated? The votes were pretty even but refrigerated came out on top, to my surprise. I had always thought a baked cheesecake would win hands down. The image that came to my mind of a refrigerated cheesecake was one of those cheap supermarket cheesecakes that you can buy for about $4.00. Which, mind you, is probably okay for one of those quick desserts but now I know its nothing like the real deal! I am fully converted to refrigerated cheesecakes. Wholeheartedly converted.
This means I never have to go through that stress of pulling the cheesecake from the oven, testing the wobbly centre and thinking "is it cooked or isn't it?"
I couldn't believe the smooth and silky texture of the refrigerated cheesecake also, and how quick and easy it was to put together, without the use of eggs. Trust me, when you've grown up watching chooks lay eggs, it can put you off using eggs. At one stage I swore never to eat another egg...but then I discovered baking. Anyway, this recipe requires no eggs and loads of chocolate, with a decadent chocolate ripple biscuit base. It is three layers of cheesecake--white, milk and dark chocolate, sprinkled with crushed biscuit and piled high with chocolate dipped strawberries. It's the ultimate cheesecake. By far the best cheesecake I have ever tasted. Stress free. 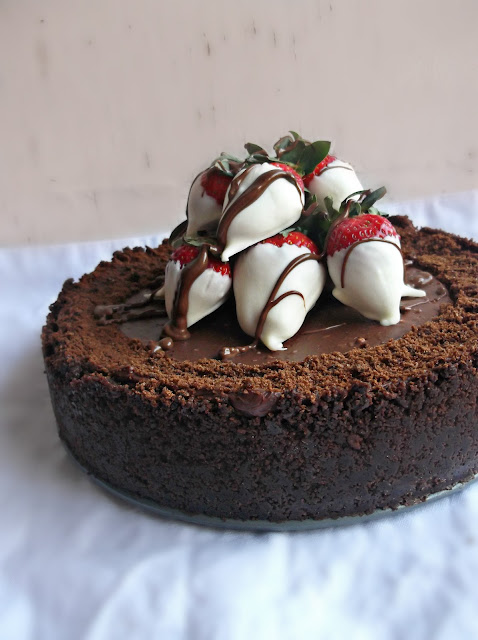 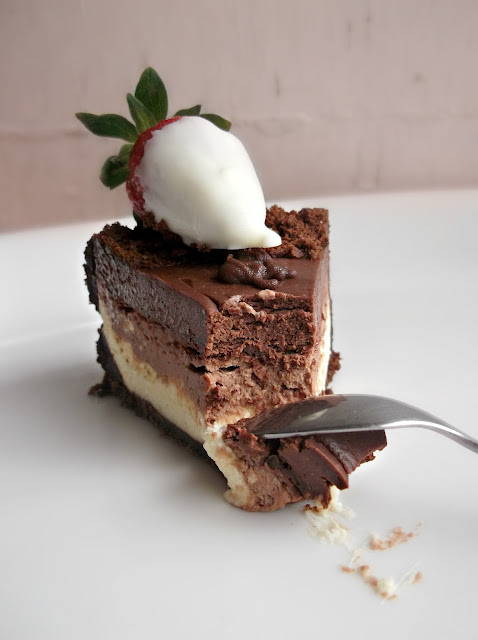 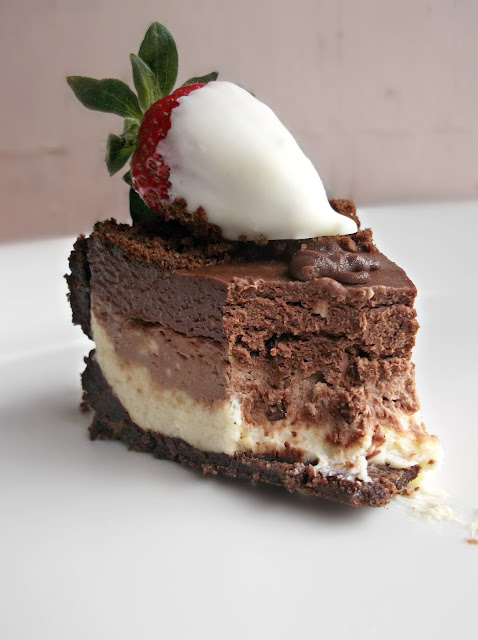 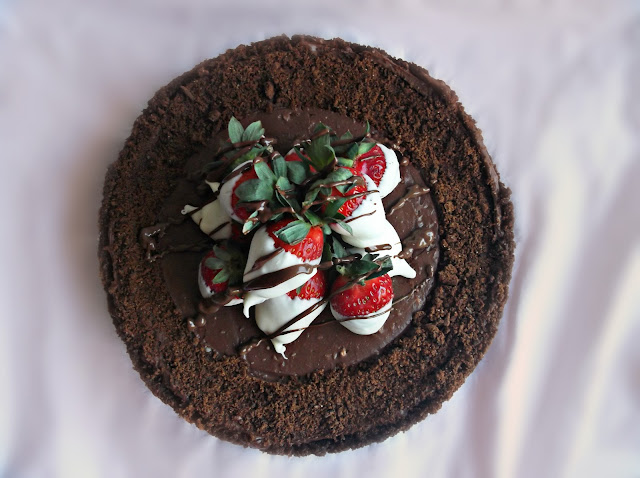 Break up 300g of biscuits into a food processor. (Reserve the remaining 50g to garnish the top of the cheesecake at a later point.)
Process the biscuits until they resemble fine crumbs. Melt the butter in a large microwave proof bowl, then add the biscuit crumbs and stir until well combined. Tip the contents of the bowl into a 23cm round springform tin. Using a straigh sided glass, press this mixture into the base and up the sides of the tin until even and compact. Place in the refrigerator to harden. 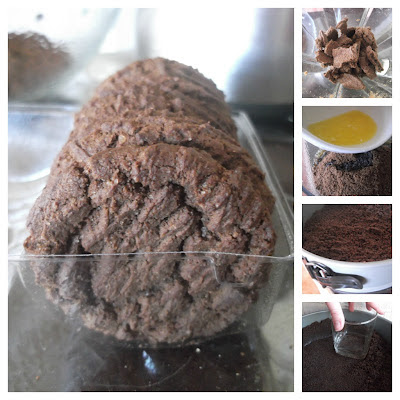 In a small bowl, place the hot water and shower the gelatine evenly over the surface. Stir with a fork until the gelatine has dissolved completely. Set aside.
In a large bowl, beat the cream cheese and sugar together until smooth and well incorporated. Add the Cream and beat until smooth. Add the gelatine mixture and stir until well combined.
Melt the white chocolate gently in the microwave. Remove from heat and set aside.
Divide the cream cheese mixture into three. In one third, stir through the melted white chocolate. Spoon this third onto the base of the cheesecake and smooth. Place in the freezer to harden.
Meanwhile, melt the milk chocolate gently in the microwave.
Stir the melted milk chocolate through the next portion of the cream cheese until thoroughly combined. Remove the pan from the freezer, and smooth the milk chocolate layer over the white chocolate layer.
Return to freezer.
Melt the dark chocolate gently in the microwave. Stir the dark chocolate through the remaining cream cheese mixture until well combined. Remove the pan from the freezer and spread with the final cheesecake layer. Cover in plastic wrap and refrigerate for 3 hours until firm.
To add the garnishes, process the remaining 50g of biscuit in the food processor. Place a 20cm round bowl face down in the centre of  the cheesecake and sprinkle the biscuit crumbs around the edges. Remove the bowl. Dip the strawberries in chocolate if desired and pile in the centre of the cake. 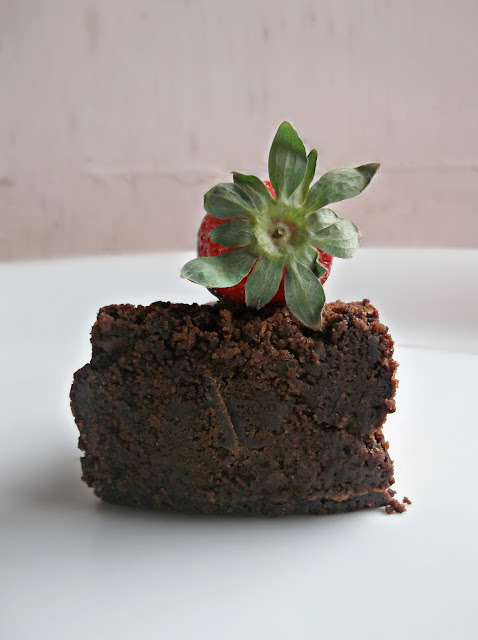 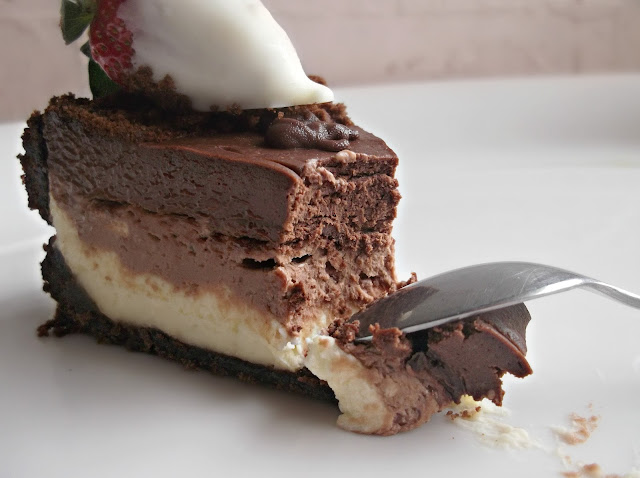 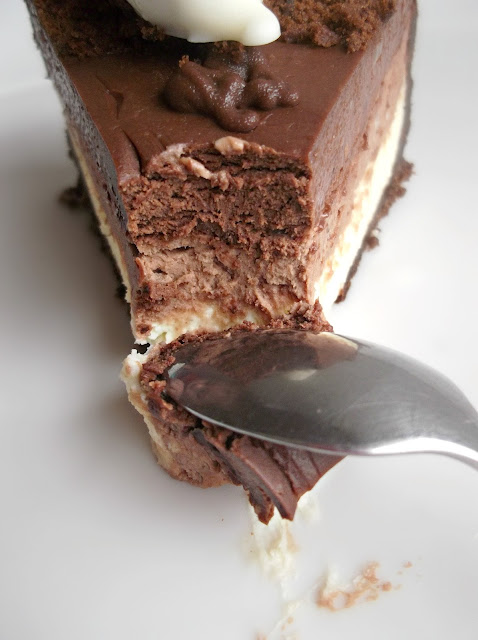